Mrs. Miller…an unforgettable teacher…and another in the series on trees…

A tree can have such special meanings and purposes.

You might ask what that has to do with a woman named Mrs. Miller. 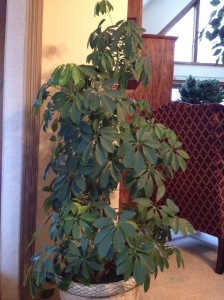 I have a schefflera tree sitting in my dining room which has endured. If you know me, and my “black thumb,” you will know that is a miracle. I’m so thankful to see that tree every day since 2006, to remind me of a mother figure in my life. When it gets new shoots every once in awhile it reminds me that life keeps marching on. Mrs. Miller’s daughter graciously gave it to me after the funeral visitations following Mrs. Miller’s death.  So many plants had been given, and I was so humbled when she called to offer it.

You see, this unique woman was my second grade teacher. As I grew older I realized how our lives have resembled one another’s in some beautiful ways. But I could never live up to most of the things she accomplished. She was a huge influence in my life

Mrs. Marguerite Miller. Most of the locals or those in Allegan county knew her. When my mom passed away she was one of my surrogate mothers. She also lost her mom when she was very young. The compassion she showed was evident by having all those little boys and girls write me letters. I still have every one that was given to me. They smell like pencils and crayons. Almost all the boys talked about studying magnets in class. The girls said they were sorry and drew some flowers. They are almost comical now. Some of you might remember “Think and Do” phonics books we did in elementary school.

A sympathy card which can still bring a chuckle…

We went on a traditional class trip a few months after my mom died. I was jumping up and down in the back seat of the bus when we hit a huge dip in the road. That little 7 year-old motherless daughter needed her and she knew the feeling.  When I went up to the front crying, Mrs. Miller’s arm was around me the rest of the way back to school.

After second grade was finished she sent each one of us a special story about the first man on the Moon, with a letter. She continued to teach us.

Story of the first man on the Moon. 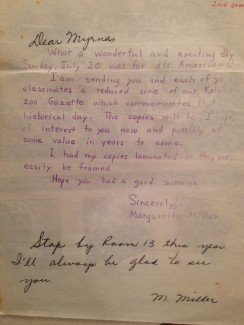 Her letter to her students.

I became a second grade teacher after also teaching first, kindergarten, and special education. She took the time to visit my classroom. She did a presentation using those mounted owls that we studied. She must have been in her sixties or seventies when she made the 45 min. drive to do that for me. She gave me a children’s trade book that day, named “Owl at Home,” and wrote a note in the front of it. I treasure it. Generations continue on. I wonder if I will ever be asked to speak to a classroom who’s teacher was one of one of my former students. Will I take the time and effort?

Our second grade class, in the Hamilton Elementary yearbook.

In high school, we lined up at the elementary school for the annual Homecoming parade. Several of us who had her in second grade, escaped from our band teacher for a few moments to visit her as she was cleaning up and preparing her room for the next school day. She was all smiles to see us and remembered everyone’s name.

Once when I was a young mom, I took my own two boys to visit her. Mrs. Miller was a wonderful cook, and had insisted that we have lunch at her home. After retirement she was instrumental in the restoration of the old Allegan county jail and many historical projects in Allegan county. As we toured the jail, my youngest son had those “light up” tennis shoes on. She often commented in later years about how funny J was in those shoes. He’d stomp all over and jump from high places to see how often the shoes would light up. I can still hear her chuckle about him, thinking he was such a delight. She asked about my sons every single time I talked to her.

There was a small group of girls who kept in contact with her in later years. One day, we had a lunch date with her and sat outside to eat in a “booth” which was a huge swing. We took a picture altogether. It was Jane, Shellie, Sheila and me. Afterwards she took us to her home. After having a nice long talk, she walked us into her dining room. Four beautiful antique oil cruets were setting out on the table and we were told to each pick one as a gift from her. I have mine sitting on my bedroom dresser.

When my oldest son A was in basketball in high school, we took the long way to the game one time to grab a visit with her. She asked so much about his basketball which was one of her favorite things to watch on TV. She was genuinely interested.

A quick visit. She would say her hair was awful, and I have a lamp coming out of the top of my head.

Every year, a few of my friends and I made sure to go to the Allegan County Fair to visit her. She said she loved to work at the Historical Building on Friday and Saturday nights, hoping many of her former students would come by. Again she asked all about our families and jobs. That building was the first and last place I’d visit when I went to the fair, hoping to see her. It just wasn’t Fall, if we didn’t see Mrs. Miller. It’s not the same now, without Mrs. Miller…but her legacy lives on there. She was the head of the Allegan Historical Society and most of the reason we have the village area at the fair, which includes the schoolhouse, and the dentist’s office which used to sit in Hamilton.

Another time my son A was playing in a tennis tournament very near her house. I knew she was bed-ridden with cancer. I was reluctant to call, for fear of what I might hear or see. Her daughter answered the phone and gave the receiver to her mother. She would love to see me. As I lifted a spoonful of ice to her lips, she thanked me and asked how A was doing in tennis that day. She cared about my family till the end. My tears flowed freely when I got back to my car. I didn’t get to see her alive again.

A story which was published in the Allegan County News in July of 2006.

The funeral was a beautiful tribute to a woman who had made a huge impression on her family, her students, and the community. They talked about her quiet witness of BEING the kind of person God smiles upon. Procession to the cemetery was slow. I drove alone and tried to stay back and invisible. Standing off to the side as the family had their committal service. Head down and tears streaming. I have gone back to gaze upon her resting place.

So that schefflera is a symbol of a woman who impacted me in huge ways. Yes, trees can have special meanings and purposes.

A lovely lady whom I adored.

Mrs. Miller will always own a corner of my heart like a second mother. I loved her. Did you have a favorite teacher, or one that you kept in contact with? If you knew Mrs. Miller, please tell us a memory you have.

Special thanks to The Allegan County News, by Tim Keith, Aug. 16, 2006. Thank you to the Kalamazoo Gazette. Heartfelt thanks to Mrs. Miller’s daughter, Jackie.

Myrna is an author who desires to use her gifts to glorify God. She's created this blog to tell stories of her childhood, musings about life, motherless daughters, grief and loss, faith in God, her family history, and facts about the Long QT syndrome. She also has a hearing condition called Tinnitus. Doing interviews with motherless daughters like herself are of great interest. Join in discussions by following this blog and commenting. She would love to hear your stories about life. Myrna is a Christ follower, wife, mother, sister, friend, aunt, and cousin. She was an elementary school teacher for 27 years; now works in her church, and a few other volunteer activities such as Hospice doing "Life Reviews" and Vigils. Myrna loves to read, write, listen to music, go to concerts, and take pictures. Her favorite pastime is boating with her husband near the beautiful shores of West Michigan.
View all posts by Myrna Folkert →
This entry was posted in Allegan County Historical Society, Allegan County News, Childhood, Grief and loss, Motherless Daughters, Mrs. Marguerite Miller and tagged Allegan County Historical Society, Allegan County News, Marguerite Miller, tree series, trees. Bookmark the permalink.

4 Responses to Mrs. Miller…an unforgettable teacher…and another in the series on trees…