My dad was a hard-working farmer who loved to talk to people. I can’t remember him ever telling me in words that he loved me. Hugging was also not really done in my family. My old-fashioned Dutch dad was very stoic. He would say “Life is for the living,” “If you don’t work you don’t eat,” “All I want is cooperation!” and similar sayings. The Webster’s dictionary defines the word stoic as, “a person who can endure hardship or pain without showing emotion or complaining” I think the word stoic fits him pretty well.

My dad, Gordon B. Kleinheksel, could be the most frustrating, stubborn man on earth at times. It was his way or the highway. He made us work on the farm, and you never skipped church unless you were in the hospital. But I respect the qualities which made him so much more than that.

The tree branch is still there, where my swing was.

Love was shown in many ways other than words. One of the earliest remembrances I have of my dad, was of him pushing me in the swing. The tree which held the swing was on his way from the house to the barn. No matter how busy he was-if I was sitting in that swing it would happen the same way. I would just have to look at him. Being the youngest of six, and a girl too…he would walk my way and take the time to push me a few times. I would giggle and say, “Push me higher!” and he would.

A very early memory is a time when I was really naughty…I played with a neighbor boy when I was only about four years old. I can’t even remember the boy’s name-I think they were renters. We were playing near an old chicken coop. He handed me the other stick and it seemed so fun to hear the crash of around one hundred square panes of glass. The deed was told, as everything was on that country street. I was standing in the back porch of that old farmhouse with my head down. I don’t remember my punishment. I remember my dad looking at me and saying not to play with that boy again. I then understood it was wrong, and obeyed him.

When riding with a girlfriend in high school, we got in a bad car accident. A farm implement scraped the entire side of the car and cut out all the windows on my side, and most of us were completely covered in glass. We went to the hospital and my dad was there before we were. He didn’t hug me or anything, but he was there with a very concerned look on his face.

My girlfriends and I just “had” to go to the Sunrise service way out in Bentheim, after a huge ice storm. My dad drove us on the thick ice instead of letting any of us drive at six o’clock in the morning. There was a hill in front of Randy Klingenberg’s dad Willis’ farm and the wheels just spun. He instructed us all to push the car, even in our new Easter dresses, nylons and heels.

A couple times, when I would back out of the parking spot at home, I ran over one of my beloved farm cats. I would run inside crying to my dad about it. He would calmly tell me he would bury the cat. I know what he did when he thought I wasn’t looking….he would put the cat in an old feed sack and bring it way out in the field beyond where I ever walked.

I never had an official curfew time in high school. But one time it was extremely late as I tip-toed past his bedroom door. After that same irritating creak in the floor that you could not avoid to get to my bedroom, my dad said, “it’s awfully late.” I felt guilty and always tried to get in a lot earlier after that.

One of the few times I saw him show emotion was when my sister Audrey died. At one point during that first awful day he took off in that old jalopy pickup that we called the “Sanford and Sons” truck. Gravel flew as he drove very fast down the road. No one ever knew where he went to grieve the sudden unexplained loss of one of his daughters. It scared me. I never saw him drive fast or behave in that way. When we were gathered in the living room a few weeks later, he was the one who announced what would be written on her gravestone. “In youth and love she sweetly rests.” Dad said so, and that was it.

In college, I dated a guy that I thought I could change and we would have a dreamy life together. One time, when I was home for a weekend doing a load of wash, dad came in and sat in the kitchen near me. He nonchalantly said that the boy was not a good influence on me and was a little “different.” At the time of course I knew everything, but it sure made me think.

When his dear third wife Pauline was under for a very serious cancer surgery and we didn’t think she would live, he sat with me in the waiting room. We were the only ones there at the time. He expressed to me along the lines of “you never know when someone will be taken from you, it’s hard.” I didn’t know what to say but just looked at him. He’d been through so much in his life.

Certain sayings of my dad are forever family keepsakes. Like, “Ya got that too yet then!” “If there’s food ya eat it, and if there’s not food ya don’t complain either!” We still say them to each other and laugh.

When I began dating my husband, he greatly approved of him. He said he was a reliable, hard worker. Dad was surely was a good judge of character. When he stuck out his elbow to walk me down the aisle, it wasn’t a “tearful give away my daughter time.” He said something like, “ok, is this how I do it, let’s go.” So funny, I loved him for that.

My dad walking me down the aisle at my wedding.

Grandpa K. always loved to sit and hold my babies. He didn’t talk to them, but just wanted to hold them. Later he took my boys to the John Deere Days, or had them up on the roof shingling with him. He was so proud of those two little white-haired boys. I’m glad he lived long enough that they know who their grandpa was.

It was “my” Saturday to have dad after his stroke. He was sitting in his wheelchair near me while I was doing household chores. We began discussing my younger years. Usually his speech was hard to understand, but he told me plainly, “Yes, those years weren’t good for you were they, I’m sorry they were really hard,” with tears in his eyes. Sometimes I could finally see what was behind those olive-colored eyes. The last five years of his life were very difficult for him but I never heard any complaining. My dad had been a very active person who drove all over the nation, worked hard on the farm, and got together with people constantly. Activities like driving, walking, dressing, bathing, his dignity, and finally talking, were all stripped away from him in painful shreds. 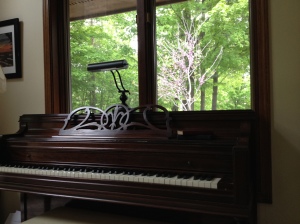 One of the first buds…

When my husband and I built our house in the country, my dad and stepmother Pauline gave us money to buy a special tree. We chose a Red Bud tree and I watched that tree grow along with my boys, for 15 years. Every spring we’d have a few weeks of enjoying the little purple buds right outside our living room window. First the boys played under it with the dog, then mowed the lawn around it, and later had their prom pictures taken in front of it. It was a symbol of my dad. It bothered me that we couldn’t take that tree along with us when we moved into town last year. One day this Spring, my dear husband drove in with a Red Bud tree to plant. I watch it change through the seasons, and think of my dad. It’s outside the living room window behind my mom’s piano.

Do you have a story about your dad or a special male mentor in your life? Pass it on.

Myrna is an author who desires to use her gifts to glorify God. She's created this blog to tell stories of her childhood, musings about life, motherless daughters, grief and loss, faith in God, her family history, and facts about the Long QT syndrome. She also has a hearing condition called Tinnitus. Doing interviews with motherless daughters like herself are of great interest. Join in discussions by following this blog and commenting. She would love to hear your stories about life. Myrna is a Christ follower, wife, mother, sister, friend, aunt, and cousin. She was an elementary school teacher for 27 years; now works in her church, and a few other volunteer activities such as Hospice doing "Life Reviews" and Vigils. Myrna loves to read, write, listen to music, go to concerts, and take pictures. Her favorite pastime is boating with her husband near the beautiful shores of West Michigan.
View all posts by Myrna Folkert →
This entry was posted in Childhood, Dad, Family, Father's day, Grief and loss, trees and tagged childhood, Dad, family, farming, Father's Day, grief and loss, memories, trees. Bookmark the permalink.